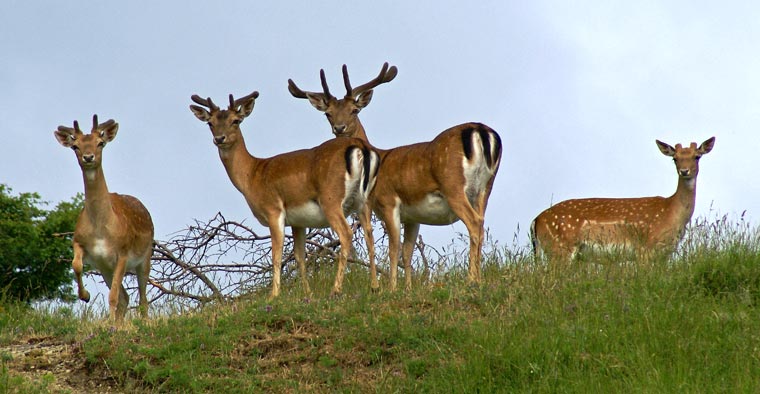 The territory of the Park is characterized by the great richness and variety of fauna, which also presents elements of great scientific interest. The high extension of the woods, especially those of tall trees, the coppices aged in conversion, the presence of many plants of considerable size and of different ages, the existence of different environments and different types of vegetation, the low population density of mankind, are all elements that make the Park an optimal territory for the presence and spread of wildlife, both vertebrate and invertebrate. Among the vertebrate fauna the most fascinating is represented by large mammals, in particular ungulates, which are present with five species - Deer, Fallow deer, Roe deer, Wild boar and Mouflon, and by the wolf, the largest predator present in the Park today. The very rich avifauna currently includes about one hundred nesting species, including species with central European distribution, such as the Alpine Tree Creeper and the Bullfinch, and Mediterranean species, such as the Warbler and the Black Yellowhammer. The extensive forests of tall trees allow the presence of demanding and selective species; in fact, many birds use the hollows of the trunks of old trees for nesting: Tawny owl, Cincia del tufo, Cincia mora, Cincia bigia and Cinciarella, Nuthatch, Minor and major woodpecker, Green woodpecker, and Black woodpecker. The numerous ecotonal areas and open environments host a rich bird life, including the Calandro, the small Averla and the Tottavilla. Among the birds of prey, in addition to those less specialized such as the Falco pecchiaiolo and the Lodolaio, there are also sylvan species like the Sparrowhawk and the Goshawk. On the rugged cliffs of the Romagnolo side are nests of the Golden Eagle, the royal owl, and the peregrine falcon. The number of bats is high, around two thirds of the Italian ones, with a strong presence of forest species. 12 species of amphibians live in the Park, including for their importance and rarity the Salamandrina di Savi, endemic to our peninsula, the Alpine Triton, which has here the southernmost stations in Italy, the Salamandra pezzata and the small Italian Geotritone, endemic to our peninsula. Of the 11 species of reptiles the most well-known and unjustly feared is certainly the Viper, an important link in the food chain. There are also the Colubro d'Esculapio, the elegant and fast Biacco, the Colubro liscio and the Colubro di Riccioli. The list is closed by the "Natrice dal Collare", and the "Biscia tassellata". The entomofauna is very rich, especially the one sustained by the dead wood in the forest environments, among which there are many species, endemic to the Italian and Apennines, and many relict or isolated species. Among all we must mention the beautiful alpine Rosalia.

What tools can be used to learn about the species?

The use of geographic and georeferenced databases is customary for many users, just think of navigation systems for travel, trekking, or sporting activities. So why not use them to explore the distribution of species and naturalistic emergencies and to make the visit of a protected area more intense? Below, we offer some tools to discover some of the most interesting species that can be observed in the National Park.

»Discover the Park's online GIS, a tool to consult distribution maps, find information on the Park's species, and find out where to look for the rarest ones;

»Discover the butterflies of the Park (App per IOS , App per Android, Check-list, digital book) a key for recognition, and other useful tools created by the Park in the context of various researches and of the Dryades project, the Italian branch of "Key to Nature";