Fall foliage in the Park 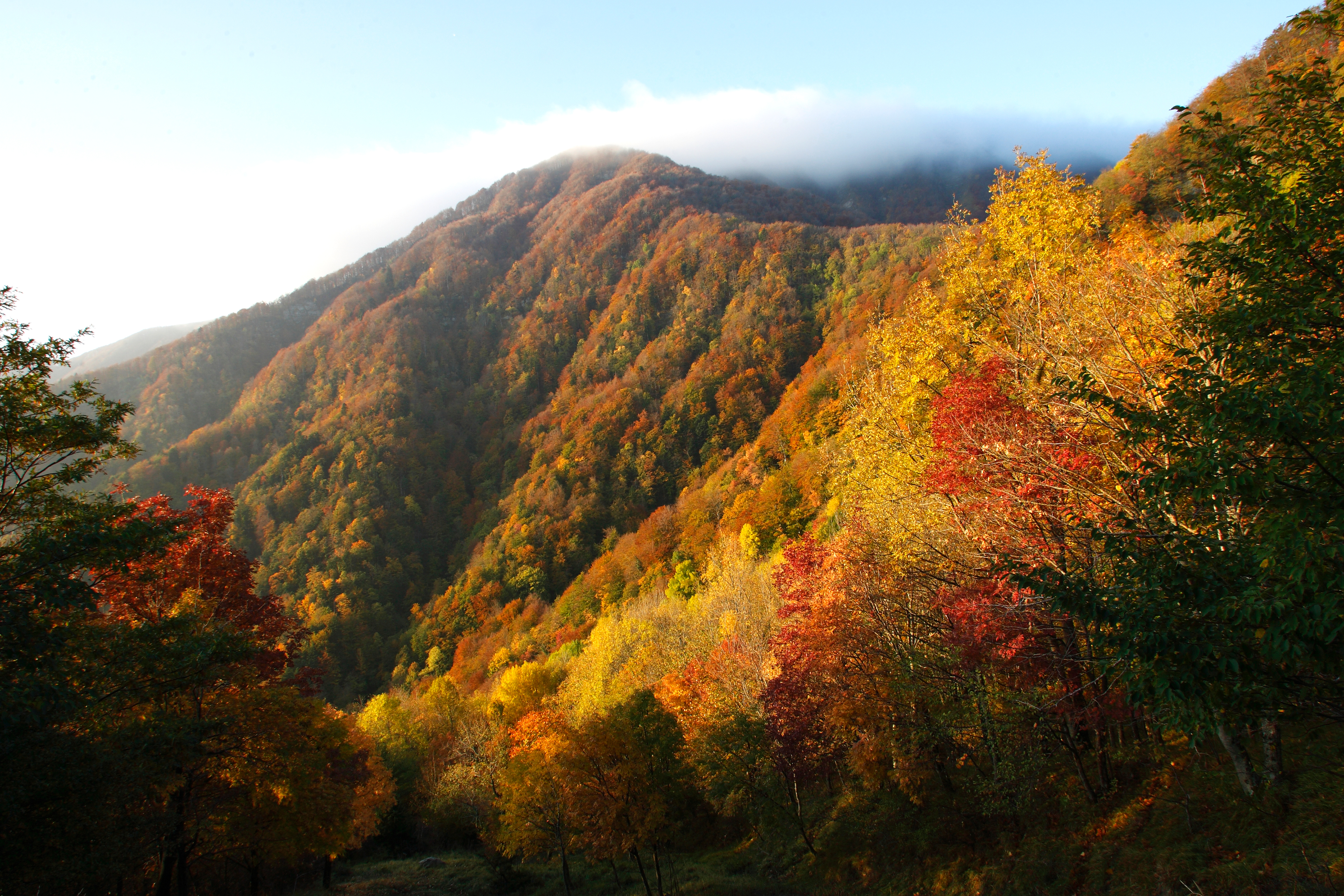 Fall Foliage Festival
Discovering the most colourful forests in Italy

Three October weekends dedicated to the colours of the forest.

For further information on events and activities write to promozioner@parcoforestecasentinesi.it

Discover more about the foliage in the Park

"Hello, good morning. An information: when and where can we admire the colours of the Forest ...?"

In this period is the most common question that we are asked and, we must say, the most apt: as a matter of fact, in this period the National Park of Casentino Forests offers one of the most beautiful natural spectacles: the colours of the Forest that, only for a few weeks, light up with infinite shades of yellow, red, green and orange.
The idea was thus born to suggest five questions and the respective answers to satisfy part of the hunger for curiosity of the many hikers and visitors who are passionate about our Park.

1) What is the period to admire the colours of the Forest?
The best periods are the last two weeks of October and the first two of November. The Park Forests can be divided into two sections: a mountain above 800-1500 metres and an underlying hillside, from 500 to 800 metres. The first is dominated by the beech, but in the Casentino Forests there are many other species that are associated with it: white fir, mountain maple, burr and opal, elm, lime trees (local and wild), ash (major and flowering ash). This specific richness turns into infinite shades of colour that have their special moment in the last two weeks of October.
In the belt of hills the colours of the oaks and hornbeams, less spectacular than the mountain belt, reach the peak in the first two of November although the opal and country maple, the cherry and the flowering ash are already coloured in the last days of October. In summary, the best days are those between the last days of October and early November.

2) What are the recommended locations and routes?
The most known place to live the emotional experience of observing the colourful forest is the peak of Mount Penna, above the Lama Forest. It can be reached from Passo dei Fangacci in the road connecting Badia Prataglia to the Hermitage of Camaldoli. Also in the Lama Forest, and combined with the ascent to Monte Penna, we recommend the hike that leads to the Lama plateau along the Scalandrini path. Basically, a dip into the colours of Casentino Forests! The same emotion can be experienced in the Forest of Campigna, going up from the inhabited area to the Calla Pass on the Granducale mule track and going down the path of the Fonte del Raggio, up (if you can make the effort) to Villaneta. In the Florentine side, from Castagno d'Andrea to the Borbotto, following the path that leads to the black Gorga, Passo Crocicchie, Monte Falterona, and Monte Falco (preferable in mid-October). Finally, do not miss the monumental forest of beeches, maples and firs that surrounds the Sanctuary of La Verna.
In November, at lower altitudes, admire the colours of oaks (Turkey oaks and downy oaks) we suggest the spectacular Valley of Pietrapazza, the path of Ripe Toscane in the solitary Valle delle Celle, the Salita at Monte Tiravento from Premilcuore, and the Acquacheta Valley from San Benedetto. And in the Casentino slope, the Tramignone path which connects Serravalle with Badia Prataglia.

3) Why can the Casentino Forests be considered the "most colourful forests in Italy"?
This a record is difficult to prove, but there are natural and historical conditions that testify to its excellence. The Tuscan-Romagna Apennines are located in the hinge of two great regions: the Mediterranean area and the European one. This geographical situation allows the association of forest species of different origins and generates an exceptional biodiversity with over forty species of trees, a true record for our latitudes. The other factor, even more important, is the conservation and careful management that these forests have enjoyed over the centuries.
From the Camaldolesi (1000 years ago), to the Grand Duke of Tuscany, to the State Forestry Corps that still manages the most intact portion of the forest, up to the National Park, history has always, or almost always, been in favour of the entirety of these extraordinary forest complexes.
And so today trees that are real rarities in the Apennines, such as maples, ash trees, elms, limes, etc., in our forests are species that are present and light up the forest in Autumn.

4) Can we distinguish the forest species from the colours?
There cannot be a precise system for recognizing forest species with colours, fortunately for ourselves and for our eyes, the nuances are infinite. But if we want to simplify, we can say that the beech comes on a golden rust colour, the curly maple is of an intense lemon yellow, the maple is yellow-orange and the mountain maple is halfway between the two, the spectacular opal maple is coloured red and orange, the cherry is red, the ash-tree is of an unmistakable pomace in the wood, the great ash tree remains green just like the hornbeam, the oaks are a rust yellow: lighter in the turkey oaks and darker in the downy oak ; the chestnut, which is still coloured in mid-October and usually lives in its own woods, is observed on the slopes with large yellow patches that are easily identified in the fresher slopes.
The rowan mountain ash leaves are typical, with a contrasting whitish appearance in the lower part and brown-rust in the upper part. Spectacular shrub bushes are observed on the walls of marly rock in the lower parts of the valleys, with flames of colours ranging from bright red, to purple, to warm orange.
Do not overlook the effect of coloration of evergreen species, which in autumn and then in winter stand out in the forest: in the mountain belt the protagonist is certainly the white fir; the yew and the holly are much rarer. In the hills, holm-oaks cling to the warmest cliffs, such as around San Benedetto in Alpe or the rare cork-turkey oak that very sporadically appears in the oak woods. And again, among the evergreen species introduced in autumn, the Neapolitan alder that borders many of our forest roads and the black pine planted abundantly in the abandoned land after the war.

5) Why do the leaves fall and the colours show up?
We are used to seeing green leaves and green is the symbolic colour of nature. This is no coincidence: green is the product of the presence of chlorophyll, which has the extraordinary power of transforming the energy of the sun into vital energy. But in the cells of the leaves, besides the green chlorophyll, there are millions of other little satchels of colour, especially yellow and orange: the yellow substance is called xanthophyll, and the orange one is carotene. In Spring and Summer, chlorophyll covers the other coloured substances, which is why the leaves appear green in colour.
At the end of the summer, a thin layer of cork grows at the stalk, and within the leaf the green chlorophyll gradually disappears and leaves yellow and orange on display. This is the case of the "deciduous broadleaves" that in our latitudes, where the alternation of the seasons is very marked, are represented in many species of different botanical families. This is when you may see mainly the yellow of the xanthophyll and the orange of the carotene. Another colouring factor is sugar substance. As a matter of fact, for the entire Spring and Summer season, the leaves have produced sugar, which is the main nutrient of the plant. The sap transports the sugar from the leaves to the other parts of the plant, but sometimes, when the tubes are closed, the sugar remains stuck within the leaves. In these cases, the sugar can cause a change in the colour of the lymph, which then becomes red or purple: thus, the leaves become red or purple, as in the opal maple. When the leaves dry out and die, they become brown and rust-coloured.

Find out more!
Despite these answers, it has to be said that the colour of the forests also depends on variables that can change the timings and ways of the phenomenon: for example, a dry summer makes autumn less spectacular, the trees are already under stress and lose their leaves earlier. In the same way, early frosts and intense perturbations accelerate the fall of the leaves and sometimes, in early November, the appearance may already be that of Winter.
However, it is always worth venturing on a hike!
In this period numerous excursions are organized to discover and admire the colours of the Forest.